I try to mostly show my miniatures on here, but I'm going to post a different type of project just this once.
I have a hard time finding shoes, so when I found these shoes on eBay quite a while ago I was quite excited. I bought them knowing that I'd change them around a bit. That floral pattern wouldn't work with anything I own. 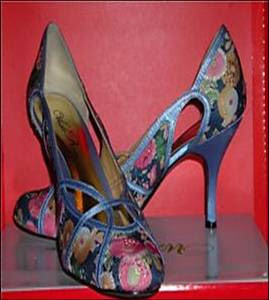 I didn't think to take photos of the process, but this is what I did with those shoes: 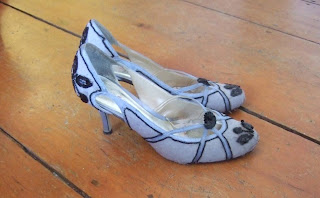 It's just a quick re-cover, with fabrics and trims that I had on hand. I didn't cover the entire shoe, since the blue satin accents seemed like they would be too difficult to change. I worked around the blue details, and ended up gluing seven separate panels of the grey fabric. I used old remnants of grey linen, which appears quite blue in these pictures. The black trim is bunka, and all the other details are beaded and sequined elements cut from some netting a friend of the family gave me. It took me two evenings to cover the shoes, but I rushed a bit.
I really like shoes with detailed backs, I've decided. The beaded designs are quite symmetrical in real life, despite how it appears here! 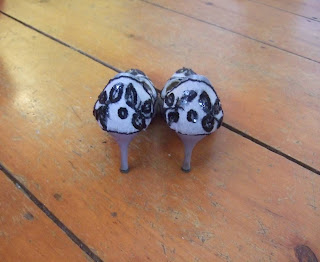 Since making them, I've worn them out and about a few times. They seem to be holding up fairly well, though some of the beading I glued on the sides of the heel has been damaged.
Posted by Eliza at 9:06 PM