This Little Light of Mine

Mom has a great wood and tin lantern in her dollhouse. The woman who made it said she would only make that one. Since mom loves that lantern, I thought I'd play around with some card stock and see if I could make her something with a similar feel. 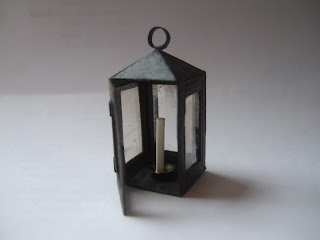 I used gold rub 'n buff to highlight the details of the lantern. The candle is a white toothpick in a painted brass finding. The windows look like they contain old glass. 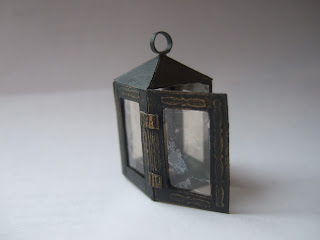 After the lantern was finished, mom was talking about hanging the lantern next to her (dollhouse) front door. I decided that it needed a hook to hang from. I didn't permanently attach the lantern to the hook, because I thought it would be easier to put up in two parts. 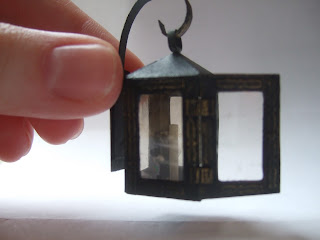 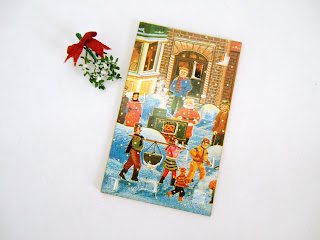 My workspace is in the dining room. That means that whenever there's a holiday, I have to do some major tidying, so that my supplies are much out of sight as possible. While I was cleaning up today, I came across this great Christmas card which I'd stashed away last year. I thought it would make great advent calenders. You just need an exacto knife, card stock, glue, and an old Christmas card with a small scene. 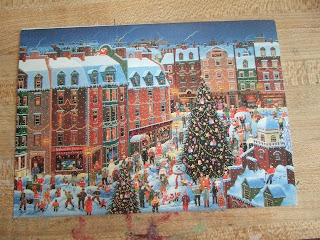 I cut my calender out of the bottom left corner of the card. I made it about an inch across, trying not to cut any of the people in half. 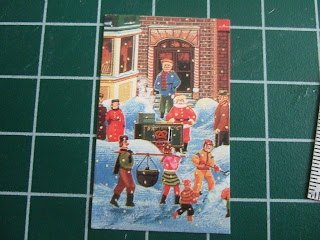 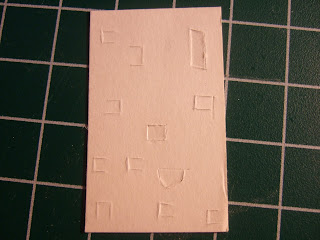 Then I used the tip of the knife to gently open all the windows, and smeared the back of the card with glue. I used Tacky since it was nearby, but a glue stick would probobly be better.﻿ 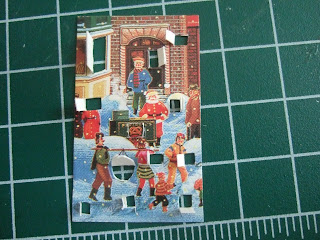 Gently press the calendar on to a piece of plain white paper, keeping all the windows open so that they aren't accidentally glued shut. I think it's easier to trim the backing to size after the glue dries. Finally, I ran a gold paint pen around the edge. You could add tiny paintings behind each window now if you want, or just leave it plain the way I did. Whit glitter on the snow, or gold on the lamps looks nice too. 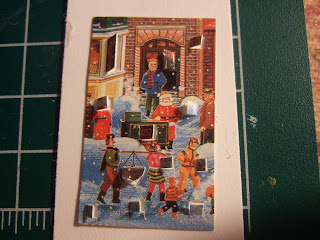 I don't have a photo of the calendar finished, because I had to hurry and wrap it before my mother saw (it's going in her stocking). Update: it took me a year, but here's the finished calendar! You can see more about the Christmas tree here. 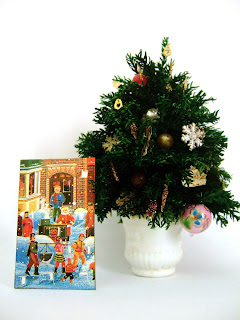 I'm posting photos of some old projects tonight, because my semester is almost finished, and I've been too busy tying up loose ends to work on any new miniatures. I made these dresses a few months ago out of very thin silk. They were really just an excuse to play with all my laces and beads. ﻿ 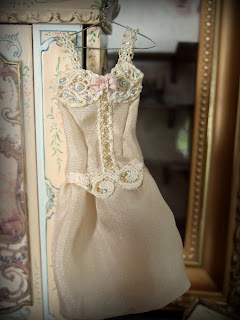 The hangers are only a temporary measure. I'll probably crumple and drape them over beds or screens eventually, which will make the torso of the flapper dress below look a little more natural. Right now, it looks too much like a cylinder of fabric. 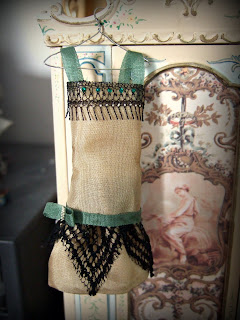 P.S. I just realized that I used the same silks for these two dresses as I used on the fans. The colors in these photos are much closer to the real-life colors of the silks.
Posted by Eliza at 6:02 PM 7 comments:

Email ThisBlogThis!Share to TwitterShare to FacebookShare to Pinterest
Labels: projects

I found the (approximately) 1/144th scale house below at a local show. It was in pretty sorry shape. The porches and gables had (painted brass) dark green trim that had been bent out of shape, and the interior had a very strange musty smell. It had also been furnished with a couple clunky pieces of cast metal furniture. I decided that, between the bad furnishing, smell, and broken exterior trim, it was time to give the house a makeover. 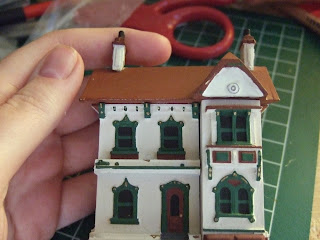 I started by ripping out the furnishings, getting rid of dried up old glue blobs, and painting everything a coat of soft white. I'm leaving the roof and front pieces untouched for the moment, because they will be easy to do after the interior is finished. The cleaning and new paint got rid of the smell, so I started papering. 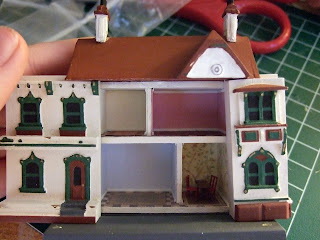 The floors and walls were in slightly rough shape (visible wood grain, and some gouges from removing the glue) so I used a heavy paper that wouldn't wrinkle over the bad spots. Then I started adding baseboard and cornice trim to the rooms. I decided that the time period of the house would be modern day, so I hand painted some trendy Chinoiserie patterns for the walls of the tiny dining room. I have a few more pieces/details planned for this room, but I think I'll probably switch to working on the living room next. 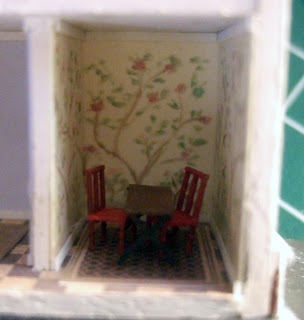 I've been having more fun with a few quick repainting projects. This bowl started out white, but I painted the inside and top band shell pink. For some reason, I'm really drawn to pink at the moment. I keep painting things pink, buying myself pink shirts, and I even framed a watercolor with a bright pink mat. You can see that I used quick dots and dashes to paint this, so it didn't take long at all. 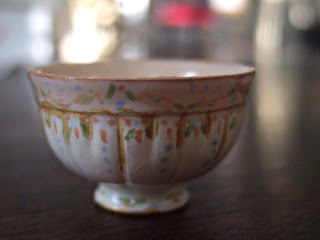 This little guy on the other hand, took a bit longer. It would have been easier to paint him in disassembled pieces, but he was already glued together very strongly. I tried to use old colors on him, but looking at the photograph I think I could have done some real aging to him as well. 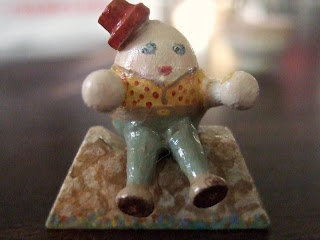 This was the last bit of work. I've been feeling guilty that I haven't done much with my draw plate (from Micro Mark.) I don't like tools to sit in a drawer for months on end! ﻿ 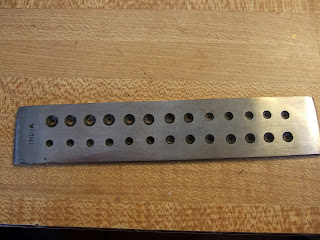 So I pulled out the smallest basswood strip I had on hand. In my experience, it's definitely better to use long, soft pieces of wood with this tool. I always break the wood several times in the process of pulling it through the holes, no matter what I do though! 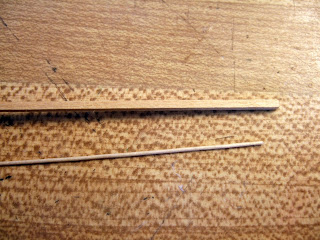 These extra thin dowels are perfect for miniature pencils! I still need to finish detailing them. They need the little metal caps that hold the erasers still, and I want to dip the points in black paint. I went with traditional yellow pencils this time, but it would be easy to make them in any color.  ﻿ 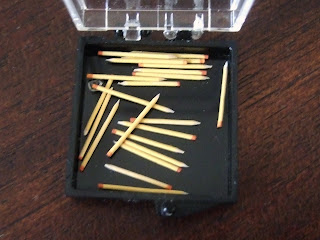