I'm not going to show the room yet. Suffice it to say that I have a long way to go. I'm still working on tiling the walls, and I'm undecided about the best way to get the look I want for the floor. In the mean time, I thought I'd show how I'm making the tiles... 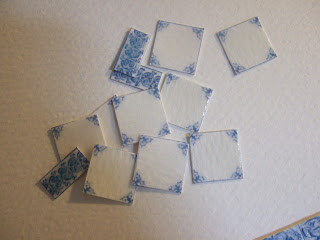 First, I found images of old tiles I liked online.I re-sized them to be 1/2" square (the border tiles are 1/4" by 1/2") and fiddled with the colors until the tiles were approximately the same shades of blue and white. After that, I printed the tiles on watercolour paper. This particular pad of paper had a little too much tooth for my miniature paintings, but the heavy texture creates a realistic ripple effect in the tiles. 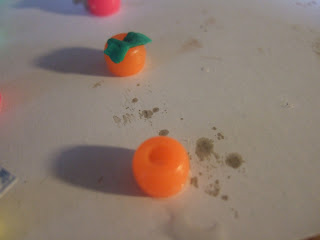 Next, I needed to create an easy system for "glazing" my tiles. I glued plastic 'pony' beads to a sturdy old piece of cardboard. I spaced the beads approximately 1" apart. Once the glue had dried, I placed tiny pieces of poster putty (aka blu-tack) on each bead. You can see the green putty on the bead in the background. 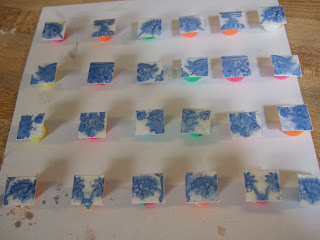 After that, it was a simple matter to cut the tiles apart one by one and stick them on beads. I used a drop of gloss medium to 'glaze' each tile, and let them dry for a few hours.When they were dry, I glued the tiles to another sheet of watercolour paper, using a square to keep the rows relatively straight.
Posted by Eliza at 1:04 PM